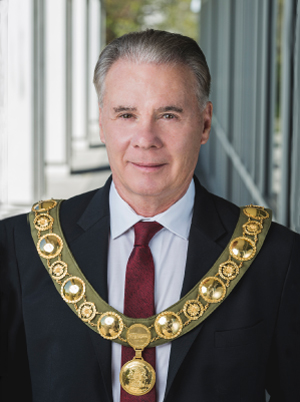 George V. Harvie was elected to his first term as Mayor of the City of Delta on October 20, 2018. Delta has been home for George and his wife Gillian for over four decades, where they raised their son Tim and daughter Taryn.

As Delta’s newly appointed Mayor, George is focused on delivering on his commitments to:

Prior to becoming Mayor, George served as Delta’s City Manager from 2002 to 2018. In this role, George led City Hall, ensuring all duties and Council directions were successfully implemented. During his leadership as Delta’s City Manager, George guided the municipality through some of its most challenging projects, including the South Fraser Perimeter Road, Deltaport Third Berth expansion, and the introduction of Delta Fire Department’s Emergency Medical Responder program.

A strong advocate for the Delta community, George has been effective in bringing together senior levels of government to resolve local issues and bring significant benefits to Delta. With his vision and leadership, George has transformed Delta’s financial management to place the City not only as debt free, but as one of the best managed municipalities in British Columbia.

In 2012, George was awarded a Queen Elizabeth II Diamond Jubilee Medal for his outstanding efforts in securing funding for nine major infrastructure projects that directly benefited Delta. The award also recognized George’s lifelong dedication to serving his community outside of the office to make Delta a better place to live.
Before this appointment as City Manager for Delta, George was employed with the City of Burnaby where he served over 30 years in a number of positions including Deputy City Manager, Director of Human Resources and Manager of the Environmental Health Department.

George has a B.A. in Economics from Simon Fraser University, an Administrative Management Special Certificate and an Environmental Health Diploma of Technology from the British Columbia Institute of Technology. He also studied Advanced Management at Dalhousie University.