The municipal brand was developed in 2008 to identify the City of Delta as a modern, responsive organization and to signify Delta's natural environment. The brand also serves to unite the three communities of Ladner, North Delta and Tsawwassen under a common theme while, at the same time, celebrating their unique qualities.

The 'bulrush' brand, which was approved by Delta Council on February 4, 2008, is an official mark used by all Departments for the day-to-day administration and business activities of the municipality, including business cards, stationery, website, brochures, newspaper advertisements, municipal vehicles, clothing, wayfinding signage and street banners.

One hundred and eight years after its establishment as a municipality on November 10, 1879, Delta, in the year 1988, was granted a coat-of-arms from the Crown, a symbol of its structure and authority as a community. These arms are a mark of honour. They were assigned by the Lord Lyon, King of Arms of Scotland, resident at the Court of the Lord Lyon in Edinburgh, one of the Queen's Royal Heralds, who exercised her prerogative to grant such distinctions to worthy recipients.

The design, which is a unique and striking expression of Delta's geography, economy and history, was developed by a Council Committee headed by then Mayor Ernie Burnett.

Description of the Coat of Arms 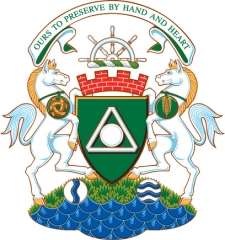 The central element, the shield, is simple and dramatic in the finest tradition of early heraldic design. Happily for Delta, it proved possible for the Lord Lyon to grant almost unchanged the logo that Delta had used since 1969, created by Robert Miller.

The background, or heraldic "field", is green representing the rich Delta lands. In the centre is a silver sun disc enclosed by a silver triangle symbolizing the Greek letter "Delta".

Above the shield is a mural coronet in Canada's national colours. The mural coronet is a special sign to represent communities of residents. Above the coronet, rising from a wreath of Delta's livery colours, silver and green, is a symbol of water based commerce and industry, a silver ship's wheel. The supporters, flanking either side of the shield, represent the foundation industry of Delta, agriculture, and its continuing importance to the Municipality. Two silver horses with manes and hooves of gold also symbolize the Communities strength and power. Each horse is further distinguished with a collar bearing symbols of two industries, fishing and grain growing.

The compartment on which the shield and supporters stand is a visual metaphor for Delta's geographic situation. The green fields bordered by the sea are "charged", on the left with a symbol for the Fraser River and on the right by a representation of Boundary Bay. Above the whole design is the motto, created by Dan Neil (an employee with the City of Delta 1975 - 2009) "Ours to Preserve by Hand and Heart", a continuing invitation to citizens to conserve and strengthen Delta's special qualities.